With careful financial policy adjustments, researchers find that nationwide EHR adoption could be on the horizon. 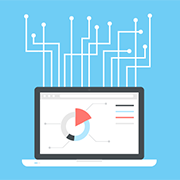 A look at basic hospital EHR adoption rates between 2008 and 2014 shows that EHR adoption rates have risen 16 percent in the course of a year, according to a recent study published in Health Affairs.
The study examines hospital EHR adoption data from the American Hospital Association, and concludes that basic hospital EHR adoption has risen to nearly 75 percent in 2014.
The authors of the study suggest that these high adoption rates could be a result of the provisions of the Centers for Medicare & Medicaid Services EHR Incentive Programs, which recently added penalties for lacking EHR integration. Because EHR use is incentivized, an increasing number of healthcare organizations are adopting the technology.
“This likely reflects a combination of the availability of financial incentives for the past four years and the impending penalties, at least from the Medicare part of the meaningful-use program. Our findings suggest that close to 100 percent hospital adoption of basic EHRs is possible in the near future,” the researchers wrote.
The researchers state that this rise in hospital EHR adoption follows a trend of double-digit increases over the course of the past five years, showing that nationwide EHR adoption may be on the horizon. However, other study findings show that there may be several impediments to achieving nationwide adoption.
In addition to measuring hospital EHR adoption rates, the researchers examined what kinds of hospitals are able to adopt these technologies. For example, the survey data showed that larger hospitals were more likely to adopt comprehensive EHR systems, while medium-sized hospitals were more likely to have basic EHR systems.
The researchers defined basic EHR systems as those that had certain functions such as measures for patient demographics, physician notes, nursing assessments, patient problem lists, patient medication lists, discharge summaries, laboratory reports, radiologic reports, diagnostic test results, and order entry for medications.
Most telling was the lack of EHR adoption for rural and small hospitals. However, of the 24.8 percent of hospitals that had not yet adopted a basic EHR system, many of them were close, the researchers found. Several of those hospitals had adopted some features of basic EHR systems, but were lacking a few critical features such as physician notes, the ability to view diagnostic test results, and the ability to view discharge summaries.
Small and rural hospitals’ inability to adopt basic EHR systems is likely due to financial burdens. Likewise, those smaller and rural hospitals were less likely to meet certain Stage 2 Meaningful Use benchmarks, and therefore were not receiving necessary incentive payments to alleviate financial burdens.
“Of particular note is the financial challenges, which are likely to be worsened because hospitals that are not successful in meeting stage 2 objectives when required to do so will face financial penalties,” the researchers wrote. “More broadly, our data point to the need to consider strategies that address ongoing financial challenges related to EHRs that hospitals face, despite the incentives that have been available.”
Small and rural hospitals were not the only ones facing difficulty in meeting Stage 2 Meaningful Use measures. Over half of the hospitals in the study reported financial issues in meeting meaningful use, and several others also cited lack of physician cooperation and the demanding requirements of the program.
Provided the increasing number of basic EHR adoptions coupled with certain specific EHR use challenges, the study suggests that careful adjustments to EHR incentive programs may help achieve nationwide adoption.
“However, given that physician resistance continues to be cited as a challenge, it will be important to identify ways to ease the conversion to electronic documentation in parallel with other changes required to meet stage 2 meaningful-use criteria,” the researchers wrote.
Specifically, incentive program penalties may hurt those who need EHR assistance the most -- small hospitals with lower adoption rates.
“However, for small hospitals participating in the Medicare meaningful-use program, the inability to keep up with attestation deadlines in the penalty phase could create even greater challenges for resource-constrained hospitals by reducing payments. Policy makers should consider additional tools to support these hospitals,” the researchers state.
Source: ehrintelligence.com